By thatmrgguy January 10, 2012 Feminism New Hampshire Smitty The Other McCain

Stacy McCain, who is busy up in New Hampshire bringing us news we can use, has to take time off to post a rejoinder to the flack he’s taking for his latest diatribe against Progressive Feminism. I still say the friggin’ horse is dead and no amount of beating it is going to bring it back to life;

The sun is shining this morning in New Hampshire, but the shadows of gloom still threaten to swallow my soul. First, I couldn’t get a “Roll Tide” from Rick Santorum and now . . . Et tu, Smitty?“Roxeanne gets me thinking with this one,” indeed!

The redheaded temptress has evidently beguiled and confused you by asserting that it is “downright sexist” to assume “that men can do things competently but women cannot.”

Obviously so, and this is exactly the point: What Roxeanne pejoratively styles “sexism” is the only possible resistance to the deceitful strategic attempt at gynocentric hegemony commonly known as “feminism.” 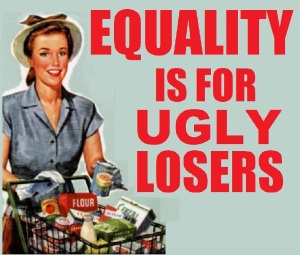 Don’t you see, Admiral Smith, that feminists are lying when they claim to want mere equality? Do you suppose that the Fair Sex shall be content to get 51% of everything and leave us with a respectable remainder? Hell, no, sir.

They want it all or, at least, they want everything worth having — every position of prestige and influence — and if their ruthless power-grab is not strenuously resisted, we shall be left only the most ignoble duties of society. Men will be hewing wood and drawing water for Our Omnipotent Feminist Overlords, tugging the forelock to beg crumbs from the distaff banquet table.

It’s a zero-sum game, you see, as any Womyn’s Studies major would be happy to inform you. Any power exercised by any man over any woman under any circumstance is, according to feminist doctrine, the Unjust Misogynistic Oppression of the Patriarchy.

Call a waitress a “waitress”? SEXIST!

I do it all the time. They call me darlin’ or sweetie when they ask me for my food or drink order and I say “Hey Hon’, hows about a refill on this coffee.”

Hey, God’s beauty was meant to be looked at and admired, but not ogled or leered at, that’s just sick!

Ask your wife to wash your socks? OPPRESSOR!

When a woman signs that contract of marriage, that becomes part of her job description if she remains a housewife. When the wife works as well as the husband, then divvying up the household chores like laundry and dishes is seen as an equitable trade off for the extra money the wife brings into the household.

He goes on to say;

This endless hectoring — the constant accusatory finger-pointing intended to shame men for their natural masculine impulses — is part and parcel of feminism’s totalitarian quest for complete dominance. And the fact that feminism, as an ideology, represents only the selfish hatefulness of a relatively small number of embittered hags does not make this totalitarianism less dangerous.

There’s the gist of it right there, complete dominance by women over men, at least on the Progressive Left side of the equation.

Remember that the Bolsheviks were but a tiny fraction of the Russian populace at the time of the October Revolution, and yet their radical ruthlessness enabled them to seize power. In much the same way as the Bolsheviks claimed to speak for the workers and peasants, feminists nowadays claim to represent the interests of all women. On the basis of that usurped authority, feminists wield the awful fury of revolutionary terror against their enemies, so that even Jeff Goldstein seems afraid to openly oppose them.

Am I alone in seeing this? Is there no one else who recognizes the dictatorial ambitions of feminism, the steel fist inside the velvet glove? Do you not understand, Smitty, that you can no more placate these would-be tyrants with soft words of reasonable compromise than you can negotiate with a ravenous shark?

Rebuke them! Expose them! Defy them! Denounce them!

Never show fear in the presence of feminists, because your fear is their second most powerful weapon, and nearly as dangerous as the first.