We had a meet and greet today at the International Deli in Seneca, South Carolina with Third District Congressman Jeff Duncan and US Senator Tim Scott, formerly the First District Representative. It was put on by the Oconee County Chamber Of Commerce, so there were quite a few county movers and shakers there. (Unfortunately, I was denied permission to shoot video of  the meeting, but was allowed to take pictures.) 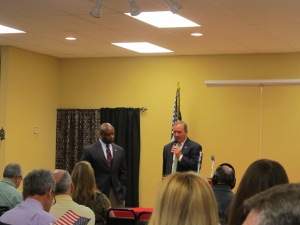 Congressman Duncan started off and touched on all the main issues that we’ve been reporting and blogging about recently, the Second Amendment, Immigration, Benghazi, the Boston Marathon bombings, the deficit, energy and rare earth mining, as well as touching on the recent controversy about the use of drones to spy on American citizens.

Mr. Duncan serves on the Energy and Miming committee, the Foreign Affairs committee and the Homeland Security committee. He was very adamant that they are going to be delving deeply into the events that led up to the disaster at Benghazi, the intelligence failures that led to the bombing at the Boston Marathon, as well as the Fast and Furious scandal. Mr. Duncan isn’t going to allow the Obama administration to sweep these important issues under the rug.

He held up his cell phone and remarked that there were about 30 or so different rare earth minerals that went into the making of cell phones and the fact that we have most of those resources here in the US, but because of government interference,( read EPA), we’re not using them. He mentioned the fact that the Chinese also knew this and have been buying up mineral rights to these kinds of mining properties.

I had a chance to talk with Mr. Duncan for a brief minute and asked him about a story reported on yesterday by our friend in the ether, Just Turn Right, about a recent Pentagon regulation that says our soldiers, sailors and airmen can be prosecuted and court martialed for talking about their faith;

The Pentagon has released a statement confirming that soldiers could be prosecuted for promoting their faith: “Religious proselytization is not permitted within the Department of Defense… Court-martials and non-judicial punishments are decided on a case-by-case basis…”.

Being convicted in a court-martial means that a soldier has committed a crime under federal military law. Punishment for a court-martial can include imprisonment and being dishonorably discharged from the military.

Mr. Duncan said he was aware of the story as reported by Breitbart and that he would be looking into it just as soon as he got back to Washington D.C. Monday morning.

During the question period, Marc Thies, Professor of Chemical Enigeering at Clemson University asked about the STEM program and the fact that his graduating students were having a hard time finding work after graduation. We do have a dearth  of engineers and those slots can be filled by legal immigrants, but Mr. Thies might have a point after this story that came out a week or so ago about Face Book using new found political clout to insert favorable language into the Immigration Reform Bill that basically gives companies carte blanche in their hiring practices. An excerpt below;

The payoff on the immigration provision could be substantial, allowing Facebook and other technology companies to avoid a requirement that they make a “good-faith” effort to recruit Americans for jobs before hiring from overseas. Facebook could also sidestep proposed rules that would force it to pay much higher wages to many foreign workers. ( Emphasis mine.)

The new measures are part of a compromise between the tech industry, which says it faces a shortage of qualified engineers and other high-skilled workers in the United States, and critics, including some labor unions, who say the H1B visa program has been abused by firms seeking cheaper labor to maximize profits. The new carve-out for Facebook and other firms, critics fear, could help companies evade the stricter proposed regulations being hailed by lawmakers as a way to crack down on ­abuses.

Senator Tim Scott came along at the invite of Mr. Duncan and mainly talked about his up bringing and how faith in God had a lot to do with how he looked at the issues and voted. He was charming and humorous, telling the audience a couple of anecdotes about growing up with a single mother who believed that love came at the end of a big switch and how he received a lot of love. Then he told about his failings as a student and how he had failed English and Spanish, as well as a couple of other subjects. He said that didn’t make him bilingual, but made him bi-ignorant. Then he talked about a gentleman who owned a local Chick-Fil-A restaurant who took him under his wing and mentored him through college and helped him get on the right path.

Both Mr. Duncan and Mr. Scott mentioned that they shared an apartment in D.C. to save the taxpayers some money. Mr. Duncan has already shown that he is aware of the burden Washington puts on the American taxpayer by giving back moneys not spent by his office on postage and other congressional office expenses, somewhere in the neighborhood of $200,000.00.

I met quite a few people there, but want to mention one in particular, Mr. Lamar McAlister, co-owner of SC Diversity Builders. He and his company have been trying to get funding and volunteers to help our South Carolina Veterans by building housing and helping with the unemployment problems facing a lot of our Veterans. He told me the story about a Veteran who was promised training as a Diesel Mechanic when he enlisted, but was instead sent for three tours to Afghanistan as an infantryman and never was given the training he was promised. He has now been discharged with no training and no prospects for a job in the “real world.”

I reckon I would be remiss if I didn’t mention the great service provided by the International Deli. They have a great selection of sandwiches, soups and salads, as well as some delectable entrees.