To paraphrase a Mel Brooks movie title…It’s a sad, sad world. Perverts are everywhere. Another story from The Daley Gator to go with one I posted earlier about another camera wielding pervert ;

A state representative in Massachussetts is being investigated after allegedly sending pictures of his genitals to a government computer.

The investigation is ongoing and the committee has not formally reprimanded the individual in charge, but it is being widely reported that Democratic State Representative John Fresolo is the one behind the scandal.

He allegedly sent ‘lascivious photos of his privates’ to a computer at the State House, and an aide complained to the Ethics Committee to start the investigation.

House Speaker Robert DeLeo has not confirmed any accusations in the case except that he did say there was ‘sufficient cause’ for an investigation.

‘In order to protect the integrity of the Ethics Committee investigation, Speaker DeLeo will have no further comment on this matter,’ spokesman Seth Gitell said.

Local blogs and radio hosts have taken the case further, saying that it was definitely Fresolo who sent the salacious pictures.

But never fear, even the women are getting into the act. There’s this from The Other McCain; 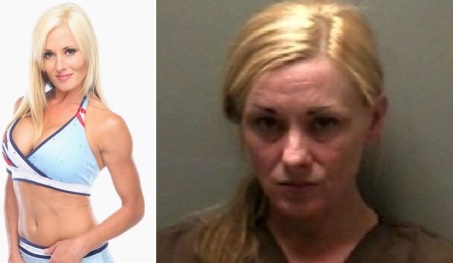 From fame to shame: NFL cheerleader (left) in her police mug shot (right)

Jeff Gurner at Viral Read reports the disturbing story of the woman who was arrested for making advances on a 12-year-old boy:

Elizabeth Leigh Garner, a former Tennessee Titans cheerleader, was indicted last week on charges of aggravated sexual battery and solicitation of a minor for child rape.
The 42 year-old denies the allegations and told police “that she was drunk that evening and that she got the boy confused with a man that was also at the residence.”
According to the Mufreesboro police report, the boy stated “she was asking him if he had ever been with a woman,” and that Garner then touched him “on the outside of his pants” and made “an attempt to take his shorts off” while offering to “perform oral sex on him.”

Well, if being drunk were a valid defense against criminal charges, there would be a lot fewer people in prison, but given the description of her actions in the police report, does anyone buy this over-the-hill NFL cheerleader’s excuse that she was “confused”?

It is routinely expected that lots of guys reading this will react by saying, “Where were these sexually aggressive NFL cheerleaders back when I was an adolescent fantasizing about them?” We are all reminded of that famous scene in Animal House where the Playboy Bunny comes flying through the kid’s window: “Thank you, God!”

Perversion has no gender boundaries. Women are just as susceptible to being perverts as men are. And people wonder how taking God out of the public sphere is effecting society. These three stories out of many every week are the result.

Update: From The Smoking Gun via Drudge, another pervert;

MARCH 22–A New York City man flying cross country with his 12-year-old son allegedly put his hand underneath the skirt of a sleeping female passenger and massaged her thigh, an act he later defended by telling the victim, “It’s not like I molested you. It’s not like I stuck my

finger in your pussy or grabbed your tits.”

According to an affidavit docketed Wednesday in U.S District Court in Brooklyn, Brett Zorse assaulted a 32-year-old woman on a JetBlue flight last year from San Francisco to New York. The 50-year-old Zorse, who lives on Manhattan’s East Side, was seated in the sixth row between his son and the victim, who was on the aisle.

The woman told investigators that Zorse engaged her in conversation prior to takeoff, and introduced himself as “Brett.” She added that Zorse’s “conversations throughout the flight all turned to a sexual nature” and that he was very “touchy feely.” Zorse is seen at right in a Facebook photo.